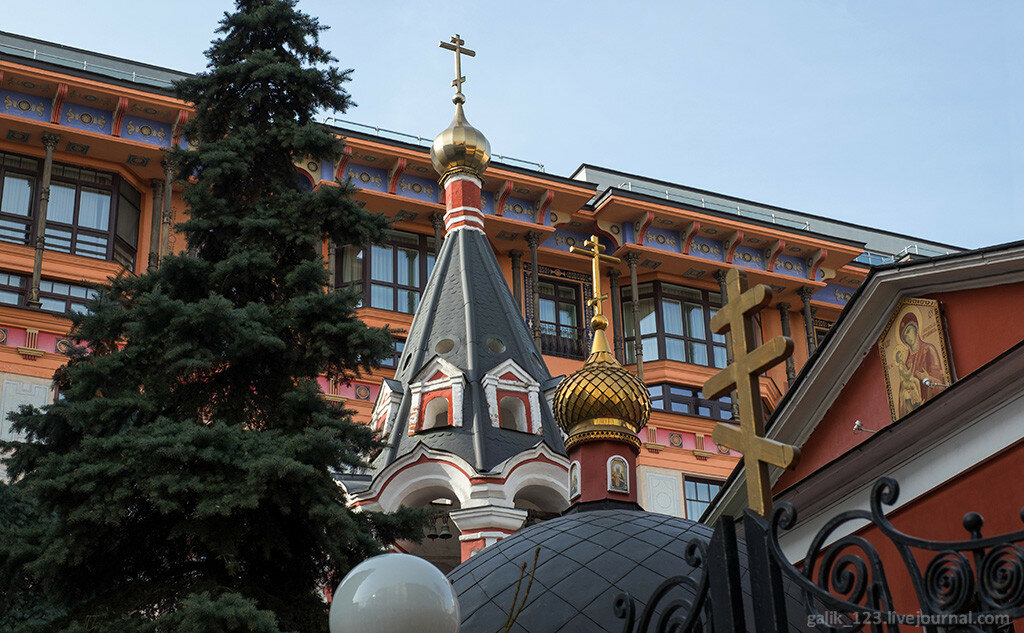 You can see some unusual neighbors in this old Arbat lane: a house built in 21st century is a background for the church of 17th century.

1. Philippovsky lane is parallel with Gogolevsky boulevard. Officially, the lane was named after the church, but people link its name with metropolitan Philipp. In 1959-1993 it had a name “Aksakov lane” after a writer Sergey Aksakov (1791-1859), who had been living in house number 9 in 1849-1851. 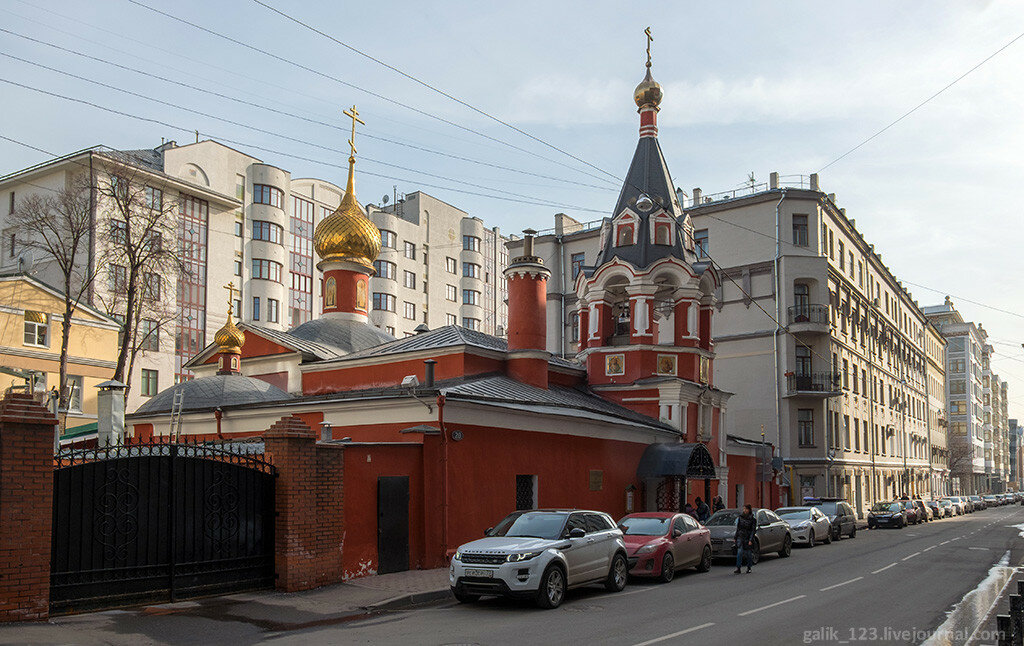 2. In 16th century the lane had a name “Ikonnaya street”, and the church was called “The church in the name of Philipp, the holy apostle”. The first written mention of a wooden Phillipovsky church on Arbat was made in 1631. The church was built near the country house of Philipp (P.S.Kolychev), metropolitan of Moscow and the whole Russia, the one, who blamed cruelty of Ivan the Terrible and had to pay for his courage. He was smothered by oprichnik Malyuta Skuratov. 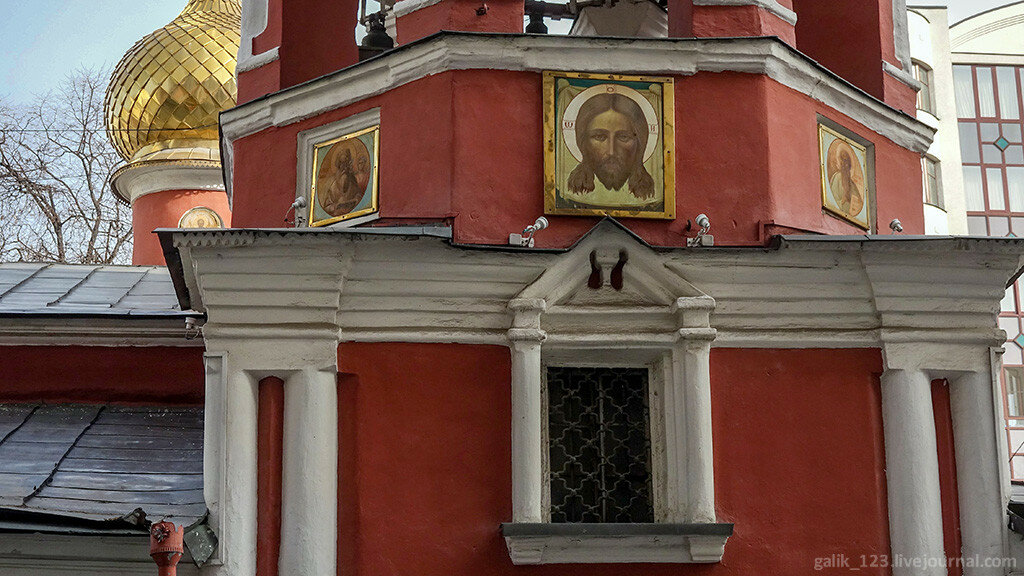 3. The stone church that you can see now, was built by Ivan Kosmin under Alexey Mikhailovich and was consecrated in the name of the Apostle Philipp in 1688. In 1812 the church was robbed and desecrated by French forces. In 1813 the temple was attached to the church of Boris and Gleb near the Arbat gates. 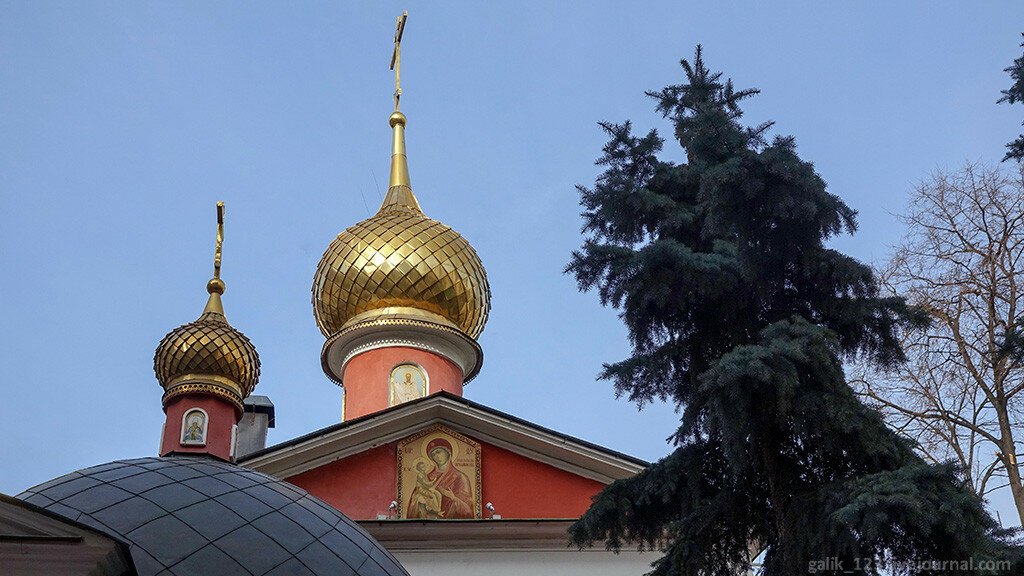 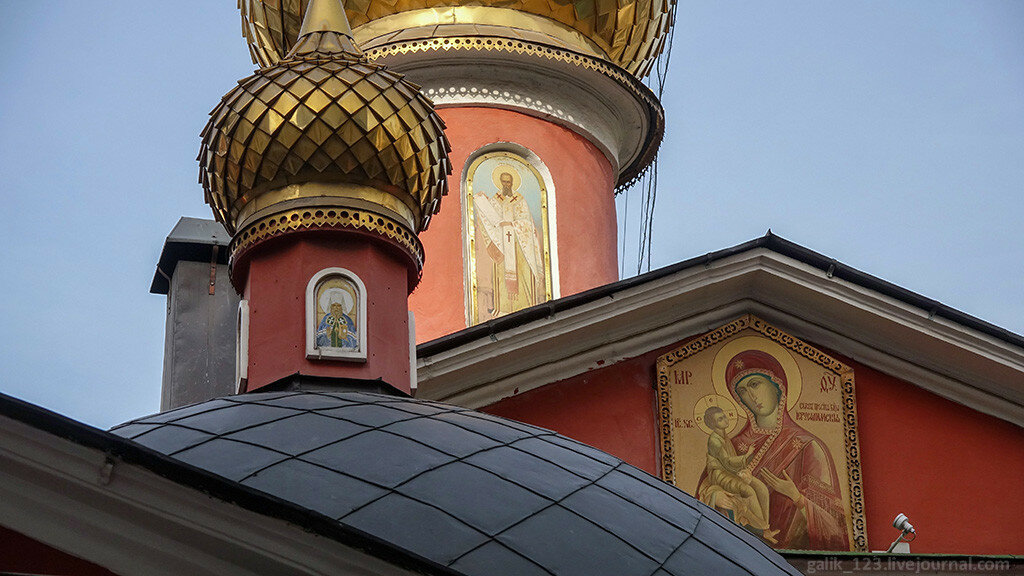 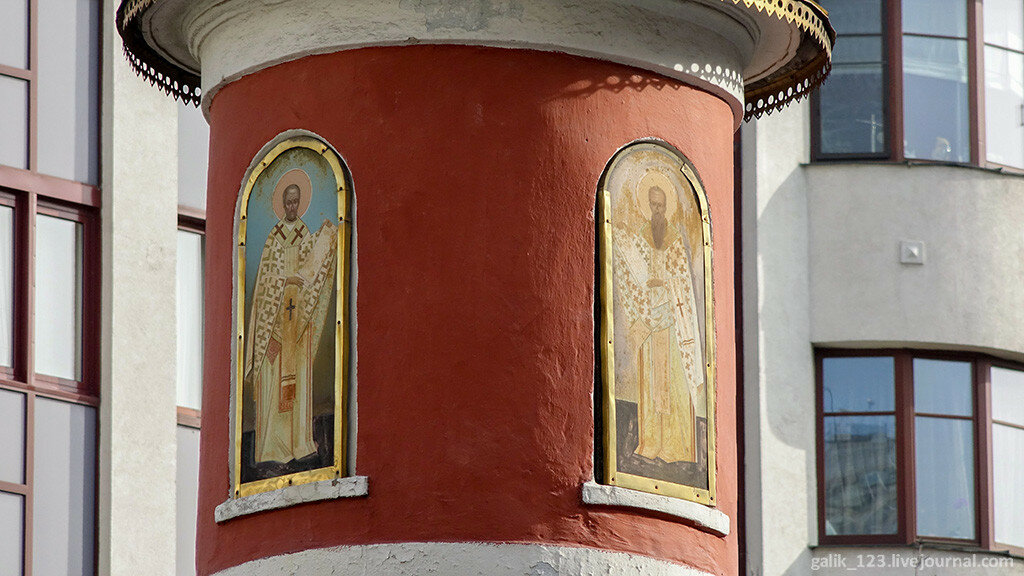 6. All that remained nowadays are the small one-headed tchetverik and a modest hip bell tower. 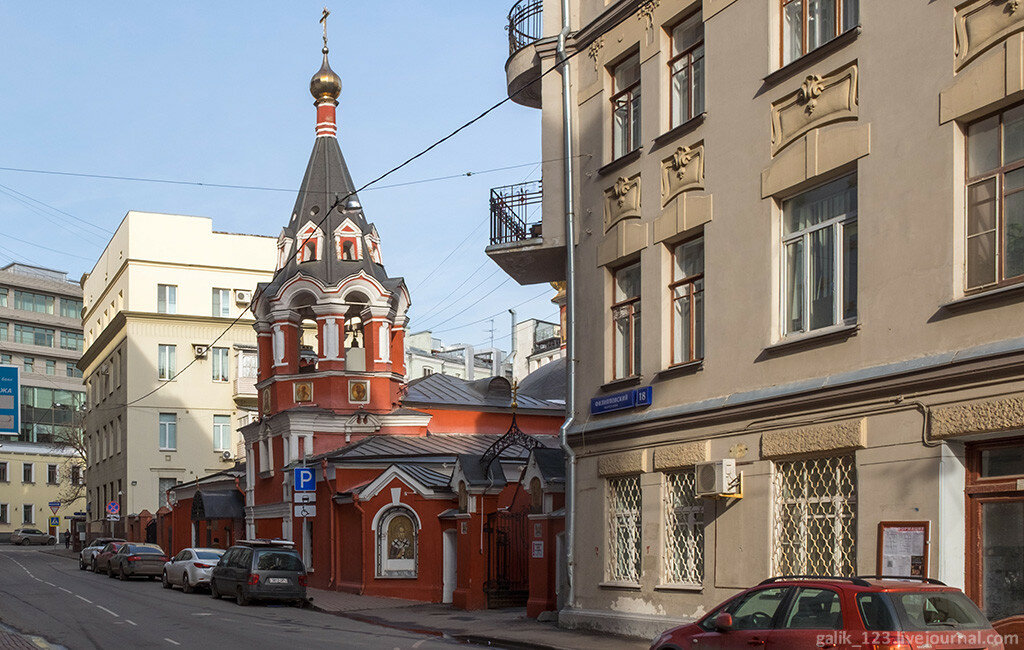 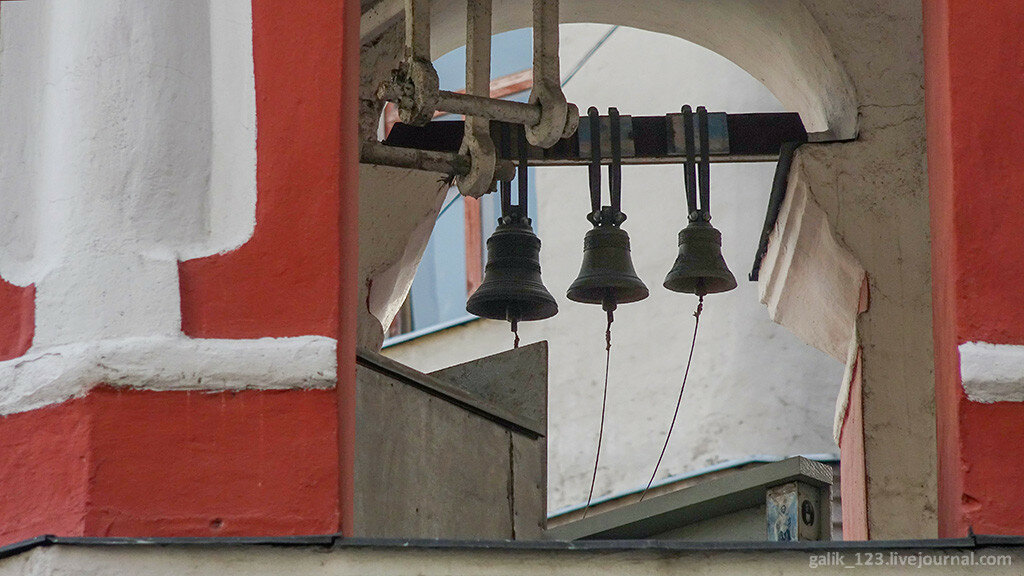 8. The fence of the church land, that was built in 1817, remained partially at the “red line” of the Philippovsky lane. 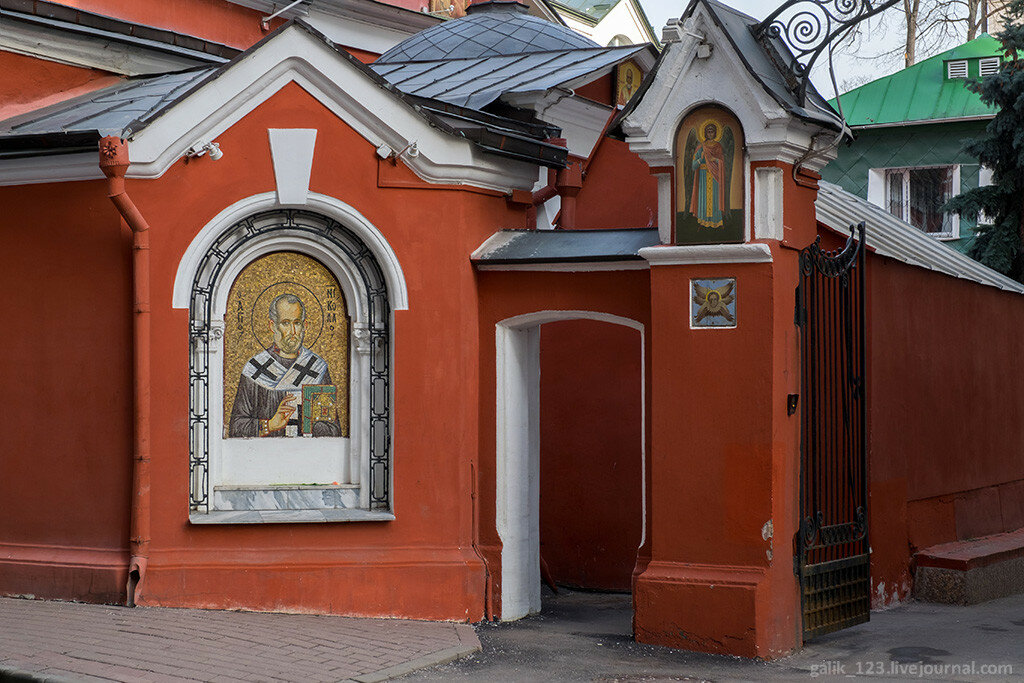 9. In 1818 by order of Alexander I the temple was used for a metochion of the Jerusalem Patriarchate. The patriarch sent a particle of the tree of the Holy Cross and the right hand of the Great Martyr Eustathius Placidus as a gift to the church. They are still kept in the temple in Philippovsky lane. The temple got another gift from Jerusalem in 1853. It was a particle of the apostle Iakov, first Jerusalem hierarch hallows. Jerusalem Patriarchate representation was closed in 1918 and resumed in 1989. The temple returned the name of the church of the Jerusalem metochion. 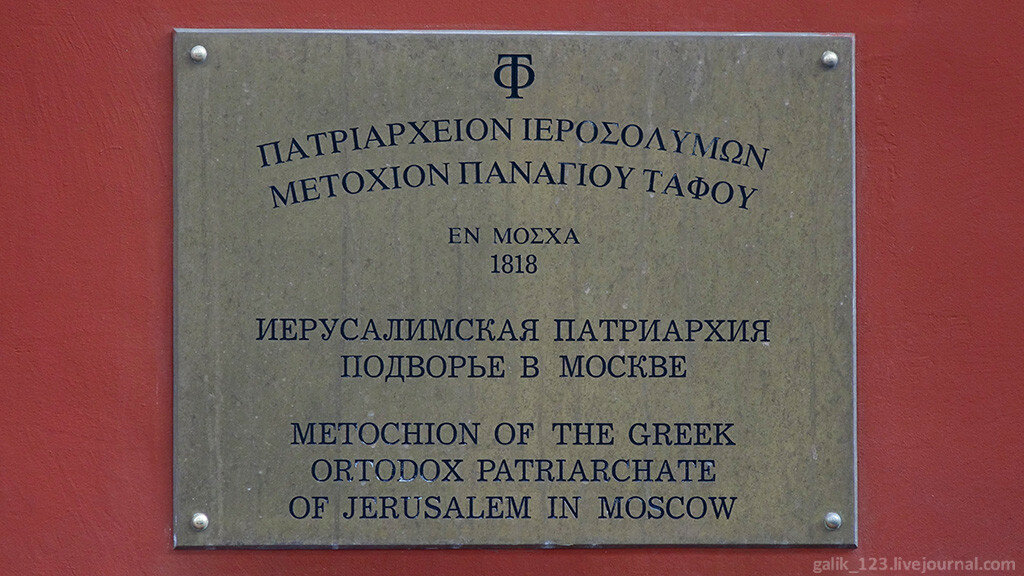 10. There was a big reconstruction in the middle of the 19th century, when a big semicircular apse and a refectory with two lowered side-altars were attached to the small tchetverik. The temple’s roof was exchanged with a new, hemispherical one with triangle pediments on north and south facades. The original decorations were destroyed and the windows were widened. 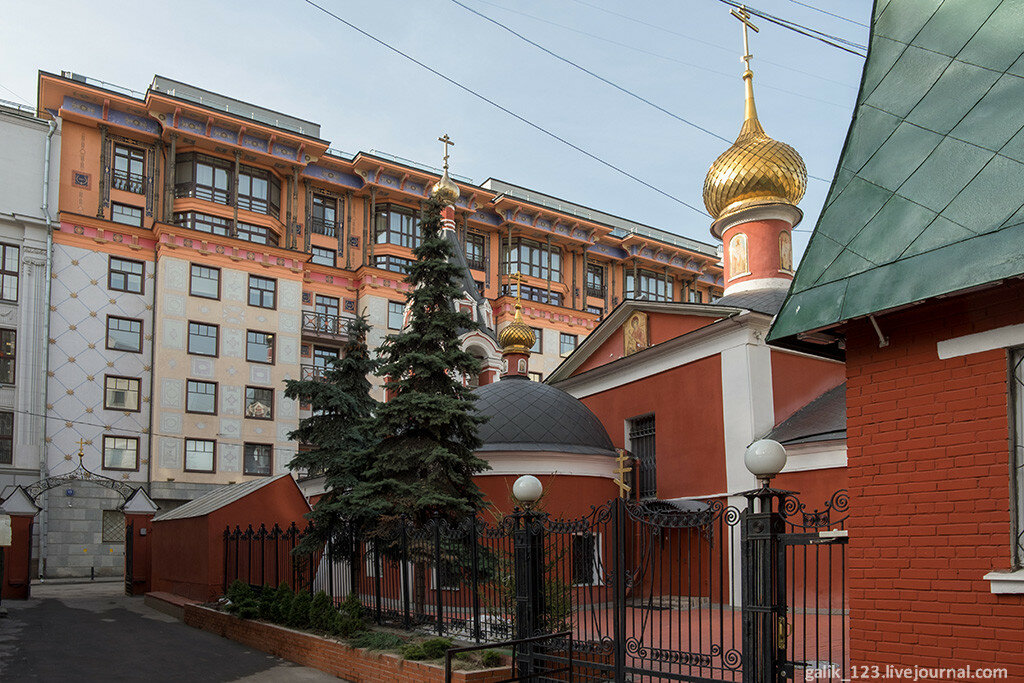 11. The big metochion house was build near the church in 1905 by the architect G.P.Evlanov. Being under Soviet rule the temple was always open. 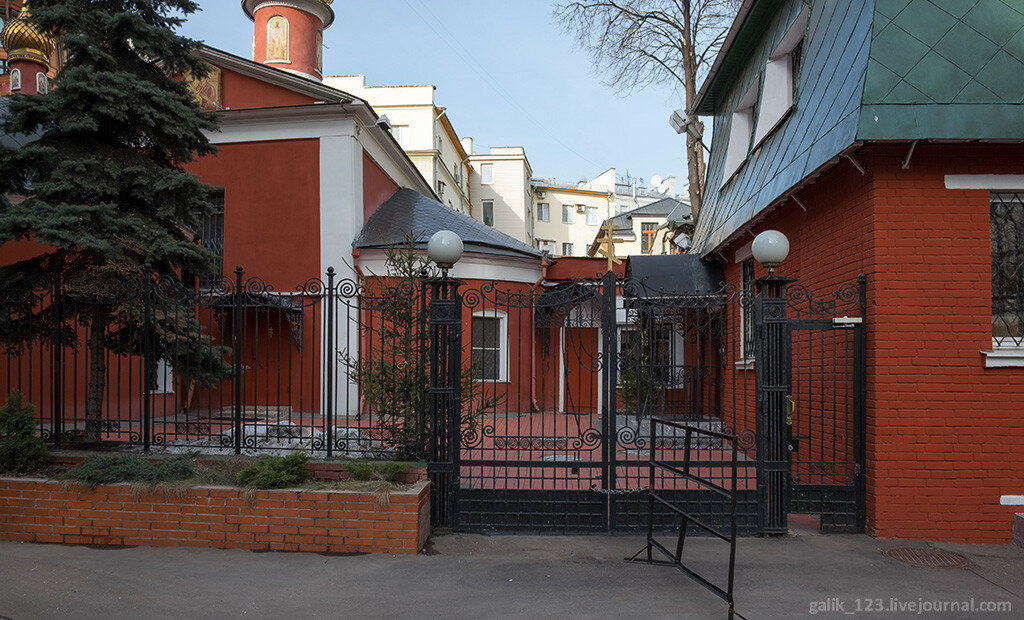 12. The apartment house “Pompeisky” was built against the temple in 2005 by M.Belov. It’s made in neoclassic style. The name is linked to the magnificent facade, which design has some references to the stylized interiors of 18th century, that imitate paintings on the houses of Pompeii. This is house number 13, but it looks like the 21st! 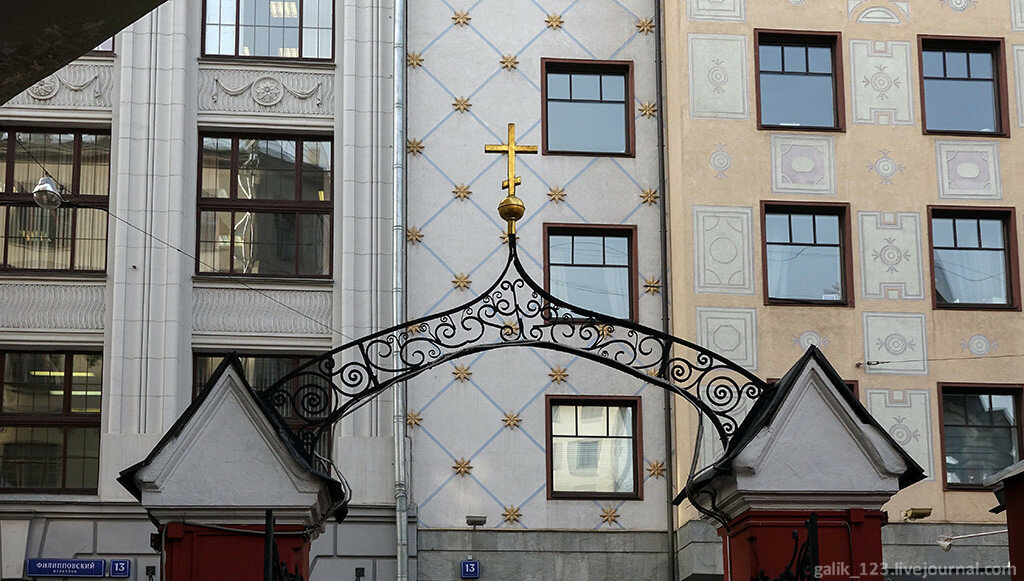 13. Pompeii style is many-coloured, festive, with tiled inserts. It’s full of different elements. And nearby you can see the Church of Apostle Philipp – the monument of Russian architecture. 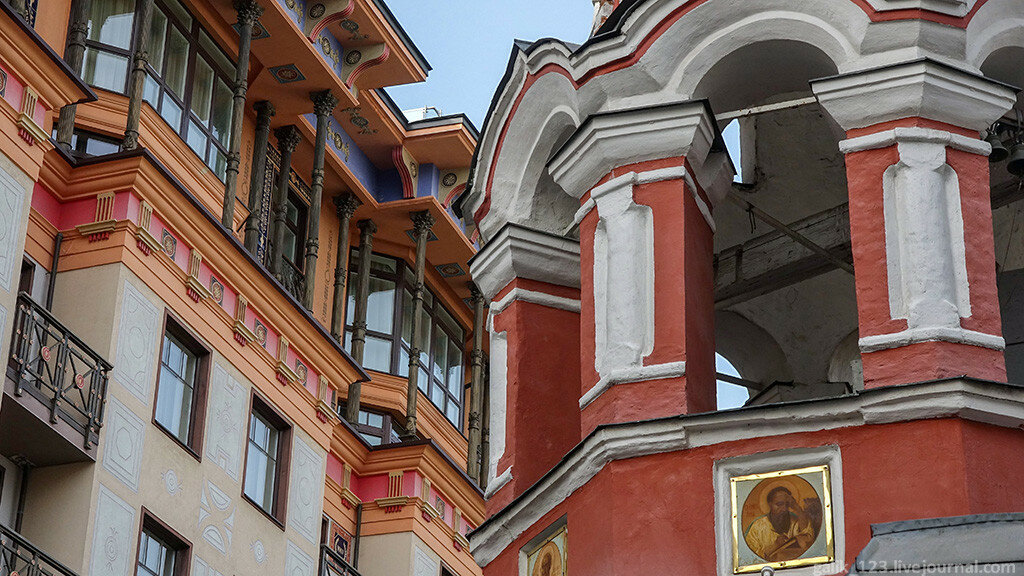 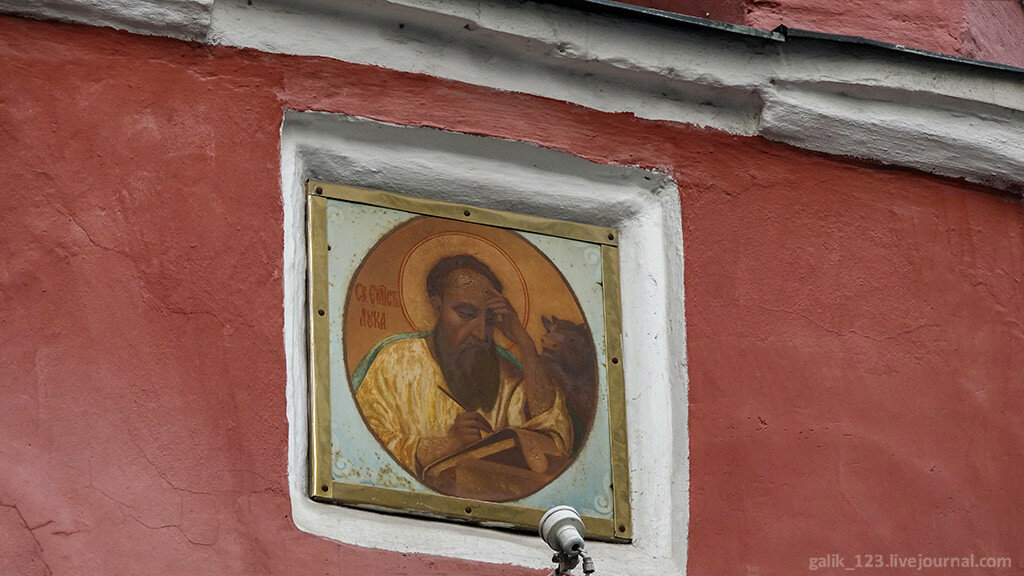 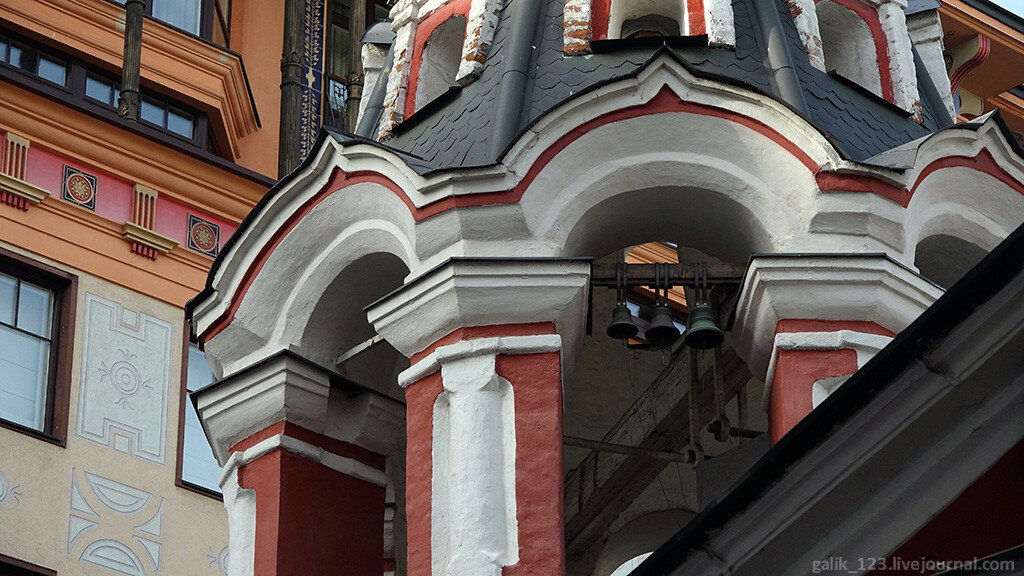 16. It’s quite similar to Russian 17th century architecture, but a bit more bright, glaringly. A house with ceramic tiles, fantastic capitals on thin columns, ornaments, paintings and patterned grills is a great background for the game of colours, so pleasant to our eyes. 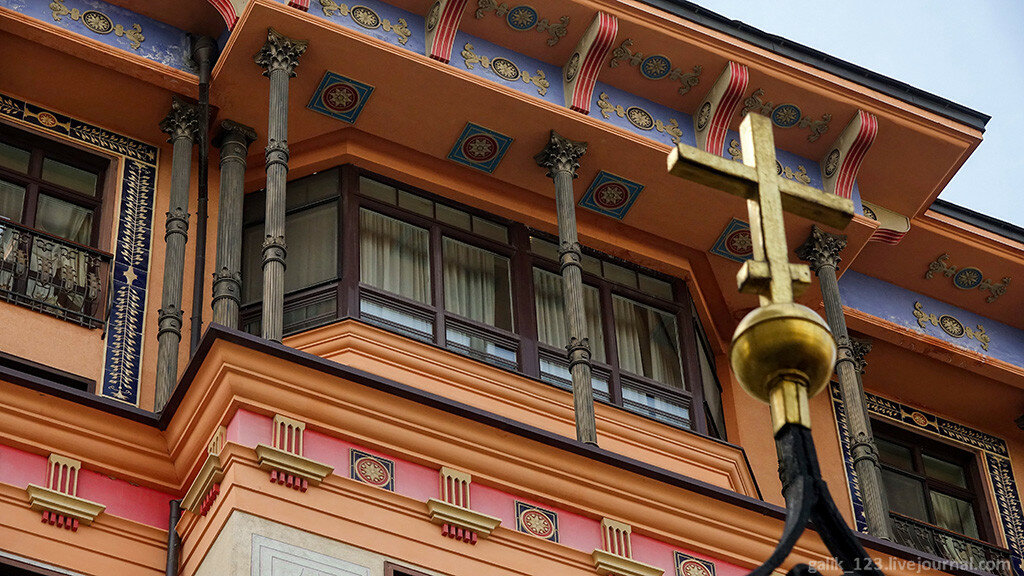 17. You can see the house from the Gogolevsky boulevard, while the church is hidden almost completely. 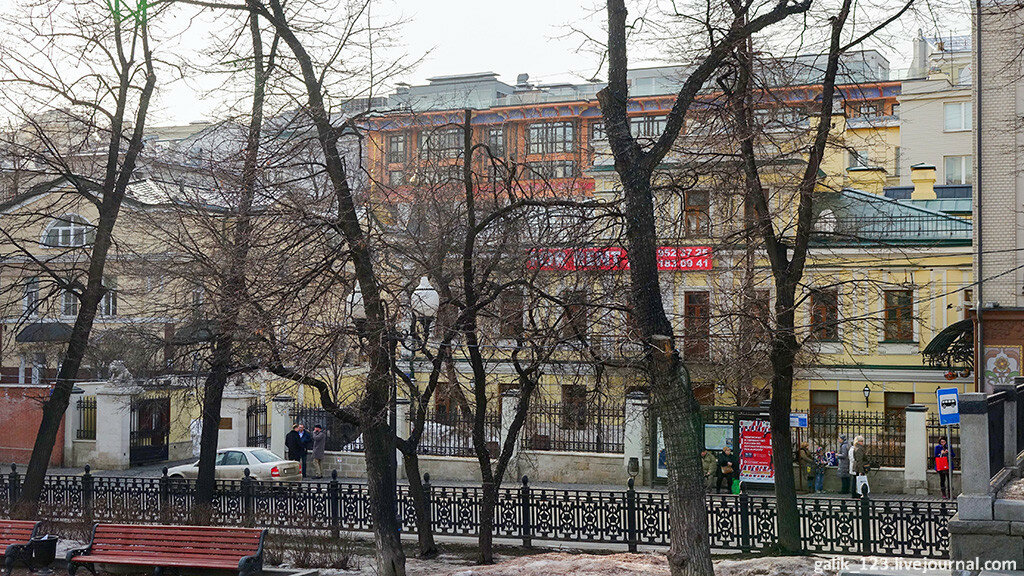 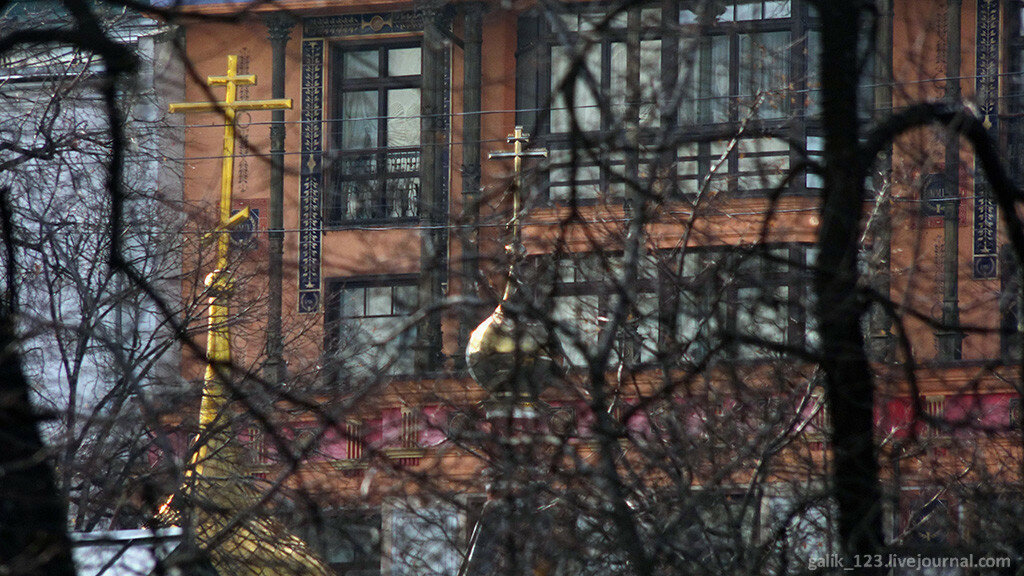 Published in architecture and temple